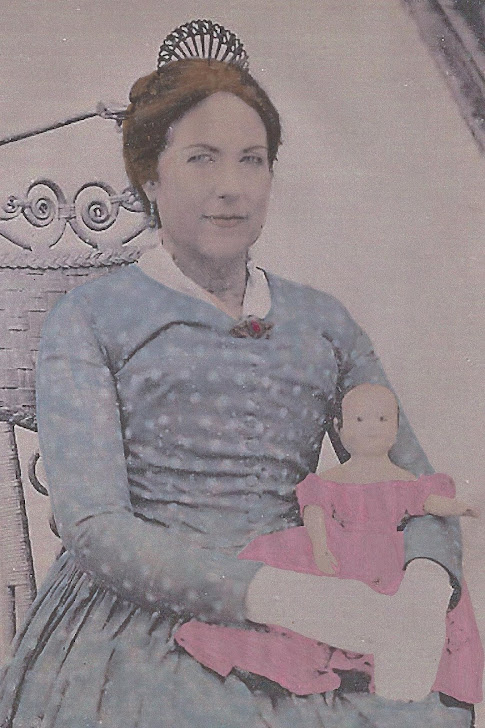 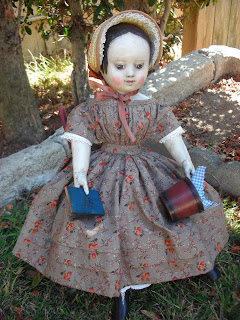 I've listed a new Izannah Walker style dollie on ebay, please stop by and pay her a visit!
She's ready for a lovely summer's day spent outdoors.  She's got her bonnet, lunch bucket and a good read, her well worn copy of "Jane Eyre" and a comfy wooden chair to set upon! 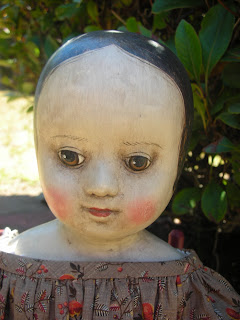 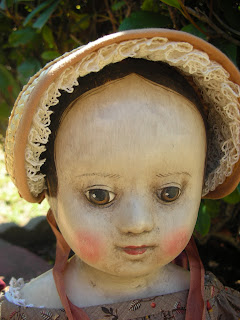 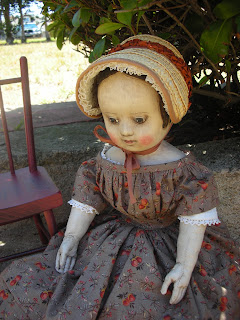 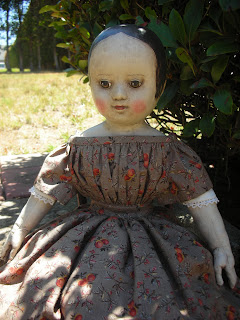 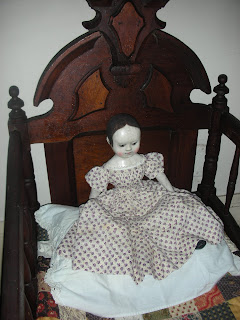 My Newest Izannah dolly, ready for summer in a lovely cotton frock of white with delicate purple flowers, made from antique fabric.  Here she is, shown in a museum setting appropriate to her 'time!'  Unfortunately the lovely antique 1860 crib she's enjoying is not included in her worldly possessions and must remain in the museum.  She must find a new place to lay her weary head. 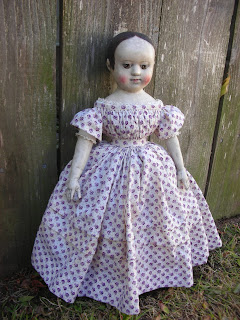 She likes to spend time out of doors, and while in my humble yard noted that my fence appeared to have been whitewashed by Tom Sawyer....her little way of making sure I knew it was lacking in that department.  And I assured her that the lack of whitewash on my fence was deliberate, an aged 'patina' that I was going for by way of neglect. 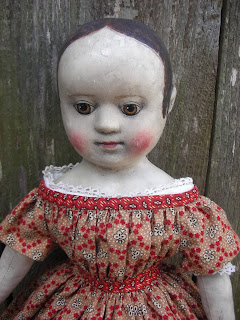 Like my last few dollies, this gal has come down with "Flora McFlimsy" syndrome and complained that she had nothing to wear, and how cruel it was of me to even think about sending her out into the world with only one dress.  So I let her pick out another one for her journey.  This frock was made from mid 19th century reproduction cotton. 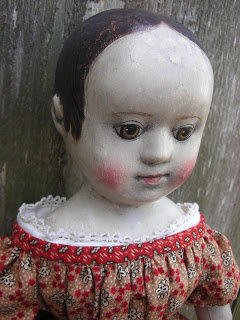 She's currently available for adoption on ebay.  Please do stop by and pay her a visit!

Olly Golly, it's been a long time since I've made a post! So much going on in my world and I always forget to have a camera on hand to capture my adventures!

I am currently as of Friday officially 'unemployed' in the traditional sense.  I've got my museum work on the side and my dollmaking on the side, which now will come to the forefront as I've suddenly got oodles of spare time.  Going to see if I can make something of that before I become so frightened of my empty bank account that I go pounding pavement looking for 'work'.  Sometimes things happen for a reason so I figure it's time to give this my 'all' and see what I can do with it.

I've been to some living history events lately with my girls, using of course, someone else's camera so I don't as yet have my own photos to share!  But soon!

Finally got to have my 'likeness' taken with the girls in an official tintype and anxious to share that as well.  I'm picking up the tintype tomorrow in Old Town.  The gentlemen who make these do so as a public service in Old Town once a month for the purposes of a living history example of period photography.  So when they see people walk by in period clothing, they welcome the opportunity of  photographing them in their historical setting.  It takes a few weeks for the varnish to dry so the lucky subjects have to wait a month to see the finished product.  I'm thinking about possibly creating a 'tinted' version of the tintype!

Our museum just received generous donations from the direct descendant of the gentleman who built the Whaley House and I've been pretty busy working on them.  Got a few of the artifacts in the museum this weekend, and am anxious to share them with you.  Got my camera in my purse this time and will be there today taking photos, finally.

As I'll be in Old Town tomorrow anyway, I figure I'll put on my period duds again and maybe charm the tintype man into taking one more of me, alone this time.  Maybe with a special little historically inspired dolly I just finished an hour ago!

Look for photos of her in the next day or two as well!

Have a wonderful, free and appreciative 4th of July!  Eat apple pie, watch fireworks and hug someone you love!
Posted by Robin's Egg Bleu at 12:14 PM 1 comment:


While my little doll languishes on ebay this week, I've been busy not on another doll, but on something I really miss doing.  Playing dress up with myself.


I used to be involved in Living History "light", meaning I wore period clothing for my work as a museum docent for the historic Whaley House Museum in Old Town, San Diego.  And I ventured off to the occasional Civil War reenactments and Victorian Tea here and there.


But then I stopped working in the museum as a docent, stopped climbing a steep staircase a bazillion times a day, started snacking a LOT more, and poof!  Robin grew out of her corset.  I mean, I REALLY grew out of that corset.  To the point where I was embarrassed to wear period clothing.  So I dropped all that and focused on making period clothing for other people who still fit into their corsets, and making dolls.


Anyhoos, I've spent the last year shedding all those extra pounds and am off in a few minutes to make a new corset, because my old one is enormous on me now!


We've got "Ladies Day" coming up next Saturday in Old Town and I'm a gonna be pressed and dressed and rarin' to go.  I'm taking my two little gals Sophie and Milla with me.  They're 4 and 6 now, and willing victims of "dressing up" for the time being.


They've got their dresses, stockings, balmoral boots, pantalettes.  But San Diego is unpredictable and this week's been bloody cold and gray.  I can't have ugly sweatshirt jackets ruining the girl's 'impression' so I've been busy whipping up a couple of period appropriate bolero jackets for them.  And petticoats.


Cinderella's always last to get outfitted for the ball, and my dress remains unfinished in favor of getting the kids ready.  Plus, I can't really bother with my dress bodice until I have a corset and that won't be finished till this evening.


Will try to get around to taking photos of my works in progress! And now it's time for sewing and boning and eyelets, oh my!
Posted by Robin's Egg Bleu at 7:26 AM 6 comments:

Izannah's been workin' in the garden! 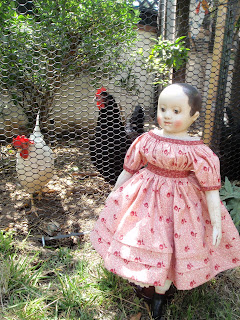 Today was a gorgeous day, and Izannah decided to spend the afternoon in the garden.  Tending the chickens..... 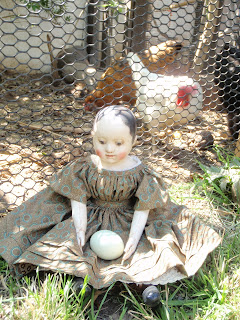 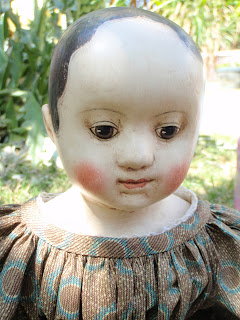 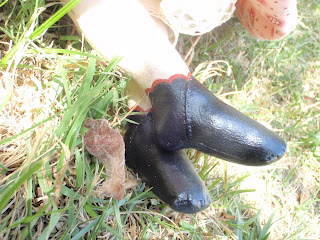 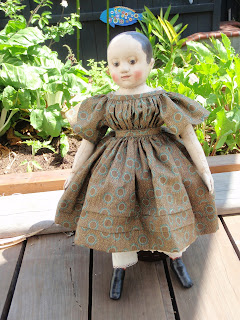 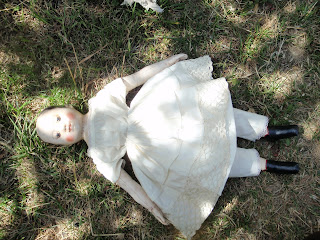 Watching the clouds roll by...
It got a little warm today so she took the liberty of lolling about in her unmentionables, since she was in the privacy of her own backyard.

She's fantasizing about what kind of yard she'll be in next week...will there be chickens or roses?

I have a new blog and will close this one out soon!

Hi all you wonderful people who've been following me!  Here's my new blog: http://robinseggbleu2.blogspot.com/  Please stop by and pay me a visit, I'm going to close this one out since it's apparently been infected by malware.  It hasn't harmed my computer, but that darned warning sign comes on and so you probably have not wanted to stop by lately because of it!  I'll be posting a new doll in a few days.
Posted by Robin's Egg Bleu at 3:14 PM 1 comment:

Email ThisBlogThis!Share to TwitterShare to FacebookShare to Pinterest
Hello everyone!  This is the first post of my new blog, thank you so much for stopping by!  I'll be seeing what I can do to cancel out my old blog since it's apparently been infected by some naughty malware type sprites.


Hopefully I can redirect anyone who was kind enough to follow my old blog here and follow this one instead.


I'm working on a new Izannah Walker type dolly, and she will hopefully be ready for her close up in a couple of days and will show up here as well as on ebay!
Posted by Robin's Egg Bleu at 3:05 PM 5 comments:

Email ThisBlogThis!Share to TwitterShare to FacebookShare to Pinterest
Older Posts Home
Subscribe to: Posts (Atom)
Hello everyone, welcome to my new "Robin's Egg Bleu" blog! My poor old blog seems to have been afflicted with some kind of blog flu and being a bear of little technical brain, I decided to go ahead and begin anew with this one!
I am a self trained doll artist specializing in historical one of a kind representations. I work mainly in cloth and paperclay. My dolls are completely hand made in a smoke and pet free environment. I rarely use molds, most of my dolls are individually hand sculpted. The clothing is hand sewn in the period correct manner.